Getting Back to Normal

It has been a long time since I’ve posted, which seems to have become my pattern over the past couple of years.   This time, though, there seem to be more positive things going on in between posts.  I’m not sure how long that will last, with the delta variant, but it’s nice for now.

Here are a few of the highlights.  As usual with this kind of post, most of the pictures aren’t related to the post.  They’re just pictures I like and haven’t gotten around to posting yet. 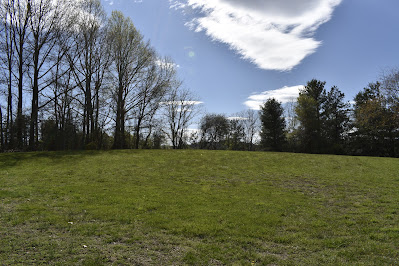 Like many people, I’m fully vaccinated.  My group got bumped up pretty fast, so I got my second dose on March 28th.   I didn’t expect to get it that soon, but it seemed like it really sped up.  Everyone at work was emailing information about clinics, and several of us ended up at a drive-thru clinic about an hour away.  It was so efficient!  Everyone was really nice, and they did a great job moving people through. 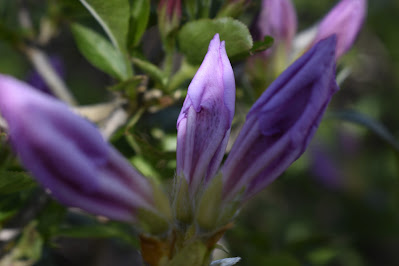 I ended up getting the Pfizer vaccine and had fairly mild side effects.  I had a small, slightly itchy rash around the injection site after the first dose.  I had a large (pretty much my entire upper arm) very itchy rash around the injection site after the second dose.  I messaged my doctor, and he called in a cream that cleared it up within about a week.  I’m told skin reactions aren’t unheard of but aren’t one of the more common side effects.  I’m very, very prone to skin reactions, so it makes sense that I’d be one of the people to get a rash.  My sister is fond of saying that I can get a rash if someone looks at me the wrong way.  She’s not exactly wrong.

I will definitely take a week-long rash over COVID, though.  Possible death or permanent lung damage versus a rash?  I’ll take the rash, thank you very much. 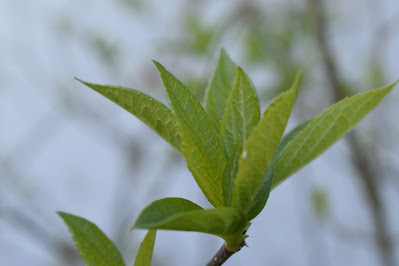 We had our neighbors over for a cookout and game night a couple of weeks ago.  We’ve been out to dinner a couple of times and have met friends for lunch.  It is so wonderful to be around people again!  I think that was something I took for granted pre-COVD, the ability to see people by going out to eat or having someone come over for dinner.   I hope it’s something I will always appreciate going forward. 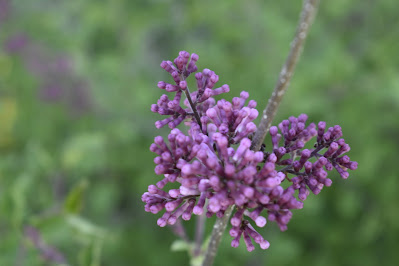 I’m finally back to working in the office.  We went back on July 6th.  There are a few more teleworking options than there were pre-COVID, but I’ve opted to keep the same schedule I had before COVID.  I’m embracing being back to normal!  I have some projects I’m really excited about coming up, so I’m doubly happy to be back.

As so many people are, we’re trying to schedule all of the appointments that we missed in 2020.  Our dentist’s office isn’t scheduling any appointments.  They just put you on a call list and aren’t saying how long it will be.  I got lucky when I called for an eye appointment in June.  They were scheduling for January but had one cancellation for the next day.  I was pretty sure my prescription had changed, so I happily took that appointment.  My prescription had changed drastically!  In addition to glasses, I have prescription sunglasses, but my insurance only pays for one set of frames and lenses per year.  I couldn’t get new lenses for the sunglasses without leaving them at the office, but I could for the glasses without leaving them.  They said it’s because the sunglasses frames are so old.  I’ve had them since 2012, but they’re still in great shape.  So I have new sunglasses (frames and lenses) and new lenses for my glasses.  And I still have my old sunglasses for working in the yard.  I’m hoping my prescription won’t change for a few years so I can eventually get to the point of having a backup pair of glasses and sunglasses.

We’ve been working on another house project.  Because, apparently, we didn’t learn our lesson with the kitchen.  Our back porch was screened in when we moved in, but over the years, the screens have torn, and the outdoor carpet has fallen apart.  Nick’s mom gave us a Lowe’s gift card for my birthday in April, so we decided to re-do the porch.  Like every other home project, it has been more difficult and taken longer than expected.  It’s so close to being finished, though!  And I think it will all be worth it.  I envision lots of al fresco dinners and time spent outside reading.

I don’t have many pictures yet, since there’s still work to do, but you can see the color we painted it in these pictures of our cute little groundhog visitor. 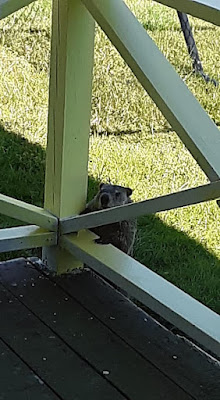 Isn’t the groundhog adorable?  They remind me of Howard the way they stand up.

The groundhog hasn’t been back.  While I would have liked to see him again, I think it’s probably best for him that he’s staying away from our yard and away from Duke.

So what about all of you?  Are things getting back to normal for you?  What have you been up to over the past few months?
Posted by Danielle L Zecher at 3:22 PM