Throw Back Thursday – So Many Sequins!

Since I haven’t done one of these in a really long time here’s a real blast from the past.   This is my sister, Gabrielle, and me after our last dance recital.   I’m fairly certain we were seven and nine, though we may have been eight and ten. 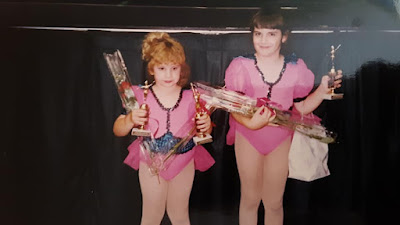 Gabby is the blonde and I’m the brunette.   I will never understand why my mom thought those bangs were a good look for me!

The trophies were for completing two years of dance classes.

You may notice that Gabby is holding two trophies and that I’m only holding one.  She also did gymnastics, and got a trophy for that.  I wanted no part of gymnastics.

They handed out the trophies at the end of the recital.  They called the names, in alphabetical order, and you walked on stage to get your trophy from the dance teacher.  You were supposed to curtsy (for the girls) or bow (for the boys) to the dance teacher, be handed your trophy, walk slowly to the middle of the stage, curtsy or bow to the audience, and then walk slowly off the other end of the stage.  The idea was for there to be three kids on stage at a time.  A kid basically exiting the stage, a kid in the middle of the stage curtsying or bowing, and a kid coming on stage to get their trophy.

We both botched that.

I got my trophy and ran like my life depended on it.   The video showed me sprinting past the two kids in front of me.  I made it off the stage and back to the dressing rooms before they got off the stage.

Gabby more than made up the time I didn’t spend on the stage.  She pranced across the stage waving to the audience like she was Miss America.  The two kids behind her passed her, and they weren’t sprinters like I was.   This picture is her still hamming it up after we got home. 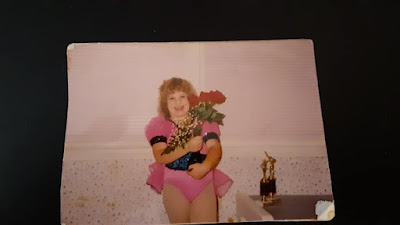 That was our last year of taking dance or gymnastics.  Our mom always made us do everything together, and I hated dance after the first year.   She made me stick it out for another year, and then Gabby had to quit when I did.   I’m not sure why everything had to be both of us or neither of us.   They should have left Gabby in dance and gymnastics since she loved it.  And, given my sprint off the stage, they probably should have considered finding a track team for me.

So what about you?  Did you take dance lessons?  Did you have to take the same lessons as your siblings?

Posted by Danielle L Zecher at 1:00 AM