Speaking of goals, the ThredUp box is gone!  It’s not time for a goals post yet, but I’m thrilled that the box was finally shipped off.  Nick was actually the one who took it to the post office, but it’s gone now.  I’m calling it a success.

My biggest news is that I started a new job at the beginning of November.  That’s part of why I haven’t been blogging much.  I accepted the new job, we went on vacation, and I had to wrap things up at my old job.  Things got a little hectic in October!  They seem to be leveling off some now, as much as things can around the holidays anyway.

I’m really, really happy in my new job.  It was a long time coming, and I really didn’t think it was going to happen.  It was basically a transfer, so I kept all of my retirement and accrued leave, which I was very happy about.  I’m almost ten years in, and I didn’t want to lose all of that.  The only negative was that it involved taking a pay cut.  So far it feels like the right decision.  I’m much happier.  No job is perfect of course, but I enjoy this work so much more than what I was doing before.  I had lunch with a friend from my old job a few weeks ago and she told me I looked happier than she’d ever seen me.  Nick says he has noticed a huge difference in my demeanor when I come home from work.  I think those are good signs.

Starting a new job did not interfere with our Thanksgiving celebrations.  As those of you who’ve been reading for years know, I love Thanksgiving.  I got in touch with the local hospice house early in November to ask about bringing the meal, and they said yes.  We stuck to our usual tradition of taking the meal to them for lunch, and then having our celebration at home in the evening. 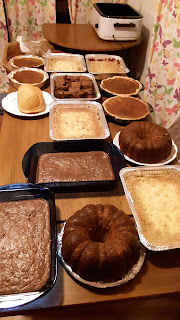 Nick peeled and mashed twenty pounds of potatoes on Thanksgiving.  Things went very well with dropping off the food.  We took turkey, gravy, mashed potatoes, sweet potato casserole, green bean casserole, macaroni & cheese, rolls, sweet potato bread, cranberry sauce, pumpkin pie, apple crisp, cherry crunch, banana pound cake, and brownies.  We even remembered to take butter and whipped cream.  Nick’s mom sent us lots of fall theme paper plates, napkins, and cutlery, so we took that as well.  Everyone was incredibly nice.  As usual, they made me cry.  I manage to keep it together until we get all of the food unloaded and set up, but once we leave I always start crying in the parking lot.  This year they told me that word has gotten around about it, and that people who work on Thanksgiving ask what time we’re coming.  I thought that was really sweet.

Once we got home from hospice we finished making the food for our Thanksgiving celebration.  We didn’t have quite as many people as last year because a few of our friends were sick, but our neighbors still came.  Honestly, they’re more like family, and I love that we have some holiday traditions with them.  We all ate way too much, then broke out the games.  We played Stinky Pig and Taboo.  We finally went to bed around 1:00 in the morning.  I was exhausted, but I loved every minute of it.

I’m sure it comes as no surprise that I did nothing on Friday.  We ate leftovers and watched Miracle on 34th Street.  I like having the lazy day after all of the activity the day before.

We did get the Christmas tree put up that weekend, but we haven’t put up the wreaths or the Christmas flag yet.  I’m planning to do that this weekend.  Frankie seems to have finally outgrown his habit of messing with the tree.  Charlie and Mortimer have not.  Caroline most definitely has not!  We seem to spend a lot of time pulling cats, mainly Caroline, out of the tree, and putting ornaments back on the tree.  It’s a good thing they’re cute.

In somewhat random news, I finally planted an ornamental cabbage this year.  We went to Lowe’s in October, and of course I ended up leaving with plants.  I’ve been fascinated with the ornamental cabbages since I was a little kid.  Does anyone else remember always seeing them in planters at restaurants in the late 80s and early 90s?  It seems like we went to places with salad bars a lot back then, and I was convinced they grew their own cabbage and lettuce out front.  I didn’t realize at the time that they were ornamental.  Anyway, I’ve wanted an ornamental cabbage for a long time now, and finally got one this year.  It’s still in good shape, even though we’ve been at and below freezing several times.  I’m hoping this means it will last all winter. 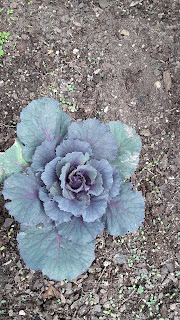 And since I always share random cat pictures in my catch up posts, here are a few more:


So what about you?  How were October and November for you?